Don Shula and Changing Strategy Based on Personnel 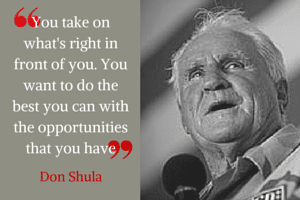 Don Shula is the only NFL head coach ever to lead his team to a “perfect season.” In 1972 Shula guided the Miami Dolphins to a 17-0 record, culminating in a 14-7 win over the Washington Redskins in Super Bowl VII, a game best remembered for “Garo’s Gaffe,” in which Dolphins placekicker Garo Yepremian had a field goal blocked near the end of the game, and then compounded the mistake by attempting a comical-looking forward pass, which was intercepted and returned for a touchdown, thus ending the Dolphins’ bid for a shutout victory.

Today, the Dolphins’ undefeated season overshadows all of Shula’s other accomplishments in pro football—including the fact that his teams posted just two losing seasons in his 33 years as a head coach, first for the Baltimore Colts (1963-69), and then for the Dolphins (1970-95). But another thing that people don’t remember is that Shula continuously adjusted his coaching strategy and tactics based on the strengths and weaknesses of his players.

For example, in the early 1970s Shula’s teams won with a strong running game, solid but unspectacular quarterback play, and a stingy defense that was greater than the sum of its parts. Those Miami teams had few superstar players—in fact, the team’s defense during that time period was nicknamed “The No-Name Defense”—but collectively the players achieved their maximum potential, reaching three consecutive Super Bowls (1971-73) and winning back-to-back championships in 1972 and ’73.

But when the Dolphins drafted quarterback Dan Marino in 1983, Shula abruptly shifted from a run-oriented offense to a pass-first attack, taking advantage of Marino’s now-legendary passing skills. In fact, the Dolphins reached the Super Bowl in 1984 largely on the strength of Marino’s 5,084 passing yards and 48 touchdown passes.

Sales leaders can learn a thing or two from Shula by adjusting their coaching tactics based on personnel. As one can see from “Is it Possible That What You Learned About Coaching is Wrong?” (our white paper on common mistakes that hinder sales coaching), every rep on a sales team can be grouped into one of four categories.

Independents are reps who are meeting or exceeding the required performance levels but show little or no desire to change.

Advice: Since independents are unwilling to follow a development plan, minimize the time spent coaching them and shift your focus to instilling a desire to achieve a higher level of performance. Then connect that desire with the skills needed to reach their goals.

Detractors are reps who aren’t hitting their numbers and lack the willingness to change, making them the greatest drain on a manager’s time and emotional energy.

Advice: The amount of time invested in detractors should be minimal. Focus on addressing the barriers to change, and also be clear about the required level of performance.

Strivers are reps who have a strong desire to improve and grow, but are not meeting the required performance levels.

Advice: Strivers present the greatest opportunity to enhance the overall performance of a sales team, as they embrace the idea that they need to improve and are open to input and advice. Therefore, you should spend the majority of your coaching efforts on strivers.

Achievers are reps who have a strong desire to improve and grow and are meeting or exceeding the required performance levels.

Advice: You should invest a considerable amount of time in achievers, as they are the stars of your team. The strategy with achievers is to grow, challenge, and retain.

Are You Playing Favorites?

Sales leaders that take the above-referenced approach are often accused of inequitable treatment—by reps and superiors alike. Never mind this criticism. When a so-called independent or detractor decides not to work with you, it’s their decision. You simply communicate that you are ready, willing, and able to meet; it’s up to reps to commit to a prescribed development plan.

Coach Shula was able to adjust his coaching strategy based on the strengths of his players. How will you adjust your sales coaching based on your team? For more on this topic download “Is it Possible That What You Learned About Coaching is Wrong?” Or contact ASLAN with any thoughts or questions.