Mike Krzyzewski and Leadership that Connects 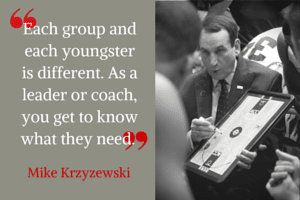 Mike Krzyzewski, or “Coach K” as he became known, has spent the last 35 years coaching Duke men’s basketball and the U.S. Men’s National and Olympic basketball teams. His Duke teams have won over 1000 games so far, and his Olympic teams won gold in both 2008 and 2012.

His coaching style is not based on some kind of winning formula that he teaches to each year’s team; instead, he gets to know his players and incorporates who they are into his way of doing things. Helped by his wife and daughters to understand how emotions and personalities can impact how men play the game, Coach K learned to confront players’ personal issues so that they didn’t get in the way of team cohesiveness.

Coach K’s teams are marked by a strong sense of connection and oneness that has come from his practice of making players part of his extended family. It is a proven psychological principle that in groups where connection is strong, members make their best efforts. When things get tough, connected groups pull together whereas groups without much connection tend to tear each other apart.

In his 2001 book, Leading from the Heart, Coach K says, “Almost everything in leadership comes back to relationships.” He tells players up front during the recruiting process, “We are developing a relationship here, and if you are not interested, tell me sooner rather than later. If you come here, for however long, we’re going to form a bond.”

Sales coaches can learn from Coach K’s vision of leadership by making sure that connection is a part of their sales philosophy. Finding ways to connect with customers is one of the key ways to be successful at sales, and modeling this with your sales team is a great way to build a sense of trust that can carry over to the way the team handles customers.

An excerpt from the ASLAN Training whitepaper, “The Six Pitfalls of a Sales Training Initiative,” exposes the difference between trying to help your sales team through connecting with their needs and trying to “fix” the problems you think they have.

People change for two simple reasons. One–because they believe it’s in their best interest to change and Two–because they believe that change is possible. We will focus on the latter a little later on. But as for the first, it is critical to position any sales training initiative as a resource to help reps ensure they reach their personal goals and not a workshop designed to “fix them” for the sole benefit of the company – with the underlying message, “if you learned how to sell, we would hit “our” number.”

It’s critical that the tone of the program is not about “fixing them” but rather providing a resource “for them.” And the best way to accomplish this is to start with what’s on their “whiteboard” – not what’s on yours. Now that’s a pretty easy concept to grasp – but if you have a large sales force, it sounds like a daunting challenge. The key? Delegate it to the front line managers.

If possible, have the managers align the sales training to the rep’s personal goals prior to the workshop. Gaining this knowledge (their personal goals) is critical to the manager’s ability to lead most effectively and should already be part of their approach to motivating their team. If involving the front line leadership is just not an option, then allocating time at the beginning of each core component of the program to ensure participants understand the personal payoff for change is a must – a non-negotiable.

If you plan to conduct pre-training assessments (always recommended), be careful of the message you deliver. Assessments are often designed to expose gaps vs. uncover the challenges reps face every day. It’s a subtle difference but one that greatly shapes the underlying message – on the one hand – we are here to “serve you” or on the other – we are here to “fix you.” By focusing on their challenges, you will expose the sales gaps while ensuring the appropriate message is delivered – “We just want to make sure we understand the challenges you face every day.” If this is your approach, participants end up feeling heard and see this as an initiative for them.

Coach K knew that being able to connect with his team would give them the best chance of success. Although he has won more games than any other NCAA coach, he said, “Our goal is not to win. It’s to play together and play hard. Then, winning takes care of itself.”

Download the entire whitepaper and contact us at ASLAN to learn more about our others-centered sales strategies that really work.